Academic Forum for the New Constitution in Chile

The Harvard DRCLAS Regional Office in Santiago de Chile has organized an academic forum, sponsored by the Luksic Scholars Foundation, which is set to follow the constitutional process in Chile over the next two years and provide open, high-caliber conversations about specific and relevant issues that Chileans will face as the country moves through this process.

The initiative was launched in December 2020 and has since then held five events through which varying perspectiveshave been discussed regarding the current work of the Constitutional Convention, such as representativeness, the future of Chile’s economic model, and the voting of the regulation that will govern this process. Academics, professionals, and opinion leaders from across the political spectrum and from around the world have participated in these conversations.

The forum is chaired by Steve Levitsky, Director of the David Rockefeller Center for Latin American Studies (DRCLAS), Marcela Renteria, Executive Director of the DRCLAS office in Chile, and Jimena Codina, Manager of the Andes & Southern Cone Program; and has an Advisory Committee composed of seven academics, six of whom have completed the Luksic Scholars Foundation’s “Harvard DRCLAS Luksic Visiting Scholars” program:

More than 150 participants, representing over 24 countries including Chile, the United States, Peru, Spain, and Mexico, have participated in the events.

The topics that have been in each webinar are as follows:

The first event was the launch of the forum, held on December 2nd 2020, in which Claudia Heiss, Steven Levitsky, Juan Pablo Luna, and Sebastian Soto introduced the initiative and its main objective: to debate and discuss issues such as social rights, the future of Chile’s economic model, restoring legitimacy to a political system that has lost public trust, the promises and limitations of a “green” Constitution, the potential role of direct and participatory democratic institutions, and how to improve democratic representation, especially that of women, indigenous peoples, and other historically under-represented minorities.

The second event, “Constituent Elections in Chile: How to provide representation during a representation crisis?”, was held on January 29th, 2021 and discussed how the public trust in political parties has reached historic lows and how the massive protest movement of 2019 led to the process of drafting a new Constitution. Toward the end of the event, new alternatives of representation were raised and the kinds of consequences these could have on Chilean democracy.

On March 19th, 2021, the forum’s third webinar titled “Constitutional change and social demands: Can the gap be closed?” took place, and analyzed whether the process of drafting a new constitution could effectively address the social demands that have shaken Chile and restore public confidence after the social outburst of 2019.

“Why should you care about the Convention’s regulation?” was the main question proposed and discussed in the forum’s fourth event which was held on May 4th, 2021. The speakers debated whether the internal procedures that will govern the operations of the Constitutional Convention will have an impact on both the way in which Chile’s new Constitution is written as well as the content of its provisions.

Lastly, the forum’s most recent event, “The new Constitution and the Chilean Economy: A break with the past?“, was held on June 16th, 2021 in which Dani Rodrik, Claudia Sanhueza, Rodrigo Valdés, and Rodrigo Vergaraaddressed concerns that arose regarding the future of Chile’s economic model, as well as the opportunities and constraints the Convention faces as they rewrite or adjust economic rules, especially now that the May 16th elections ended in a decisive support of independent representatives over political parties, and thus, turning politically to the left.

The organization of this academic forum is in collaboration with:

For more information about this forum, you can visit https://drclas.harvard.edu/chile-es as well as Harvard DRCLAS’ official YouTube channel to access the previous sessions’ full recordings or their respective summarized versions.

You can also check out the following podcast, supported by Harvard DRCLAS, which references topics and ideas discussed throughout this forum: https://cooperativapodcast.cl/la-convencion-de-chile?ts=20210819135654&categoria=la-convenci%C3%B3n-de-chile 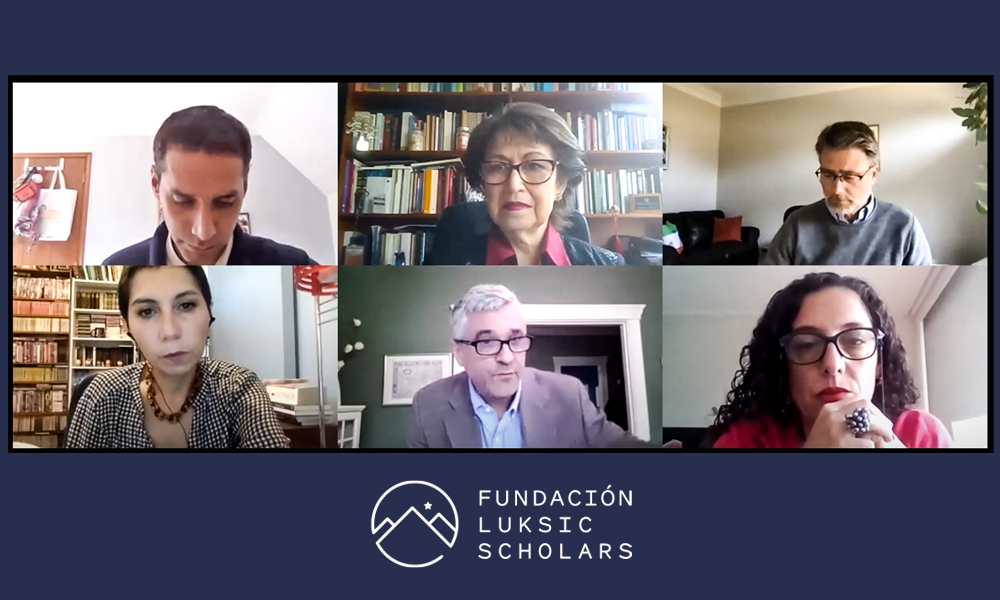