Rodrigo Inostroza describes himself as a man with an “entrepreneurial soul”. This is how he ventured into the business of bulk sale of mote wheat, a venture with which he won the first version of Impulso Chileno in 2018. With “Trigo Mote Valle Yungay” he has faced the effects of the social outbreak and pandemic, but also, he has made great strides closing commercial alliances and selling his products in different supermarket chains, in different regions of the country.

Those who know Rodrigo Inostroza (46) can describe him by his “go-getter” personality and always wanting to do something new. His entrepreneurial soul, as he says, has always kept him related to commerce. He started selling clothes and shoes in Yungay, but the business did not convince him. He wanted to aspire to something more, to have his own brand and dedicate himself 100% to it.

Rodrigo was born and raised in the city of Talca. However, he has lived in Yungay for more than 22 years, since he married his wife Oriana Irrázabal, “yunganina at heart”, and they decided to start a family. The Yungay Valley and the Ñuble Region in general are recognized as wheat-growing areas in Chile. According to data on the 2018-2019 cereal harvest season and published on the official website of the Office of Agricultural Studies and Policies (Odepa) of the Ministry of Agriculture, 75% of wheat sowings are concentrated precisely in the regions of Ñuble, Biobío and Araucanía.

The wheat market is one of the main agricultural activities in our country. With this in mind, the comparative advantages of his area and with the idea of being able to realize the dream of having something of his own, Rodrigo in 2018 created “Trigo Mote Valle Yungay”. However, they needed to boost the project and on Oriana’s recommendation he applied, without many expectations, to the first version of Impulso Chileno.

With a good performance, Rodrigo won $5 million to finance his project and 6 months of training with the Pontificia Universidad Católica. “It was fantastic, I never expected to receive preparation from the MBA Business School (UC). I never expected to have such a prepared mentor, who could give me another vision, no longer as a businessman but as an entrepreneur,” he says enthusiastically. “They taught us to make a good business proposal and to believe the story”.

Rodrigo is in charge of the wheat selection, precooking, drying and packaging process. At first he sold 35-kilo bags in bulk to wholesalers in Concepción, Los Ángeles and Chillán. But when he realized that this resale system was not convenient, he decided to start packaging his own products and target a new public, such as warehouses and supermarkets. “It was a three-year process to reach the format we currently have. Today we sell half-kilo and kilo packages, with easy-open hermetic and sealed”.

This entrepreneur says that with “Trigo Mote Valle Yungay” he intends to pay homage to the culinary traditions of the Mapuche people.  Rodrigo explains that this people use a lot of mote wheat in their gastronomy, where one of their famous ancestral preparations is the “catuto”, a kind of dough made with crushed grains of cooked and peeled wheat or mote wheat. According to Rodrigo, it is eaten with honey or natural jam.

Throughout the expansion process of his business, he had to face the consequences of the social outbreak and then the effects of the pandemic, which forced him to close for 5 months. Inostroza says that this enterprise “has been all about beating adversity”, and that in spite of the difficulties, with a lot of hard work, he has been able to get up to offer his quality products, managing to generate alliances with large stores and supermarkets of the Cugat chain, which allows him to sell his mote wheat from Rancagua to Puerto Montt.

The latest commercial agreements have motivated this entrepreneur, who already has a team of four workers in the area, to continue working to expand his business. “In the short term I want to enter the big supermarkets, Líder, Jumbo, Unimarc and have our brand present on their shelves so that people start to know us”.

As a long-term goal, Rodrigo hopes to reach other countries, export his mote wheat and make the Mapuche culture known. “There is a reason why our products carry the Mapuche identity and a review of the ancestral history of mote wheat in Spanish and English so that it can travel around our country and cross borders,” he says. 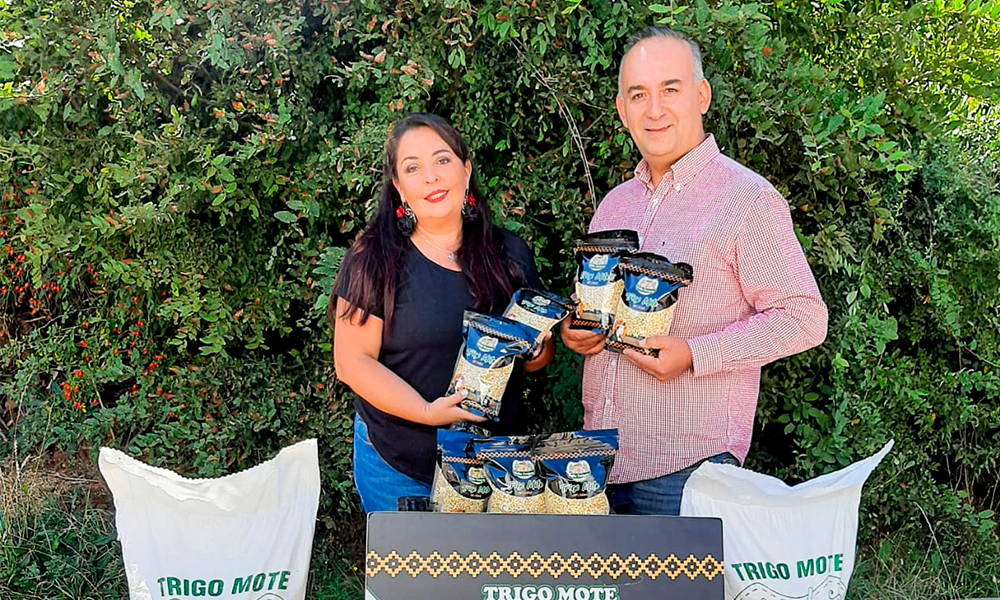